4 Steps To Get Rid of Mould In Air Ducts 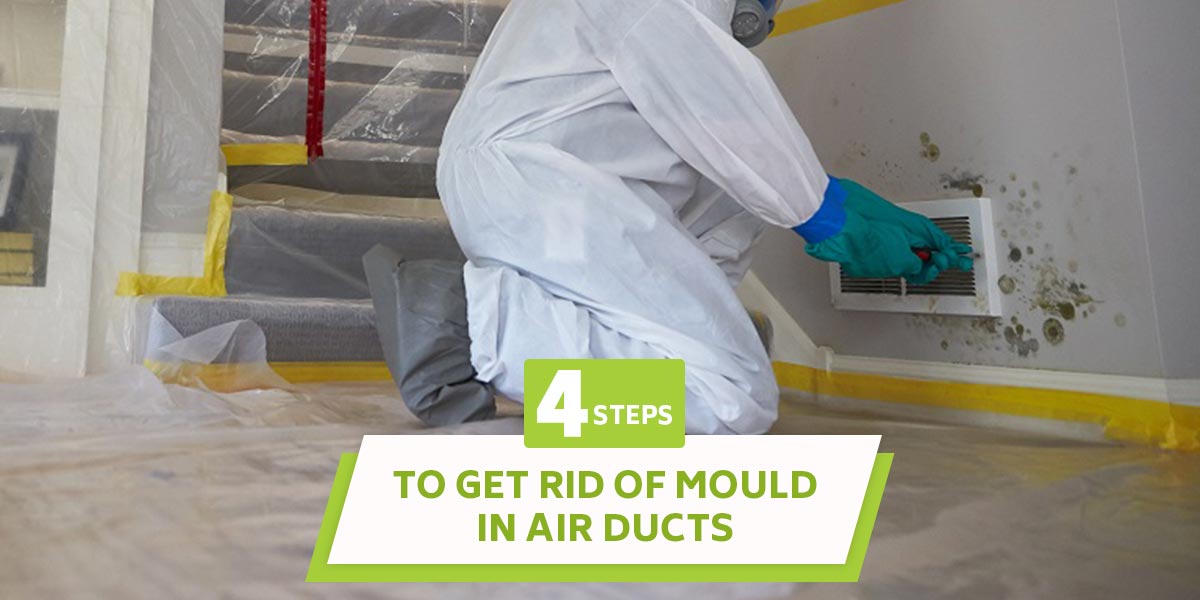 Black mould in air ducts is poisonous, they can be found in any setting that provides food. Humid and stale environments give this fungus all the food it needs to thrive. Including inside walls and inside vents and other ductwork. When you experience black mould in air ducts cleaning the vents out is the first step, but you will also need to eliminate the source of the mould to eliminate it completely.

Now not all black mould is dangerous, there are various types of this fungi. To tell if black mould may be growing in your home, is dangerous, just follow your nose. Black mould gives out a musty, earthy smell, like dirt and rotting leaves. That is a telltale sign of mould’s presence. Stachybotrys (the scientific name for black mould) smells especially strong. All moulds need food, water and a dark, stagnant environment with temperatures that are normal.

Here are the Common Causes of Black Mould in HVAC Systems

Not properly vented air duct system. Mould in air ducts most commonly occurs when there is moisture inside the ductwork. As cool air flows through the vents on hot days, the moisture in the air can condense inside the air vent. You can see the same principle at work when you drink an icy beverage, and water beads up on the outside of the glass. When moisture is present, mould can flourish inside vents. The mildew can be introduced into the vents in several ways.

Here is a step by step list given by Tom’s professional to help you in mould removal at home.

4 Steps To Get Rid of Mould In Air Ducts

Have the thing you suspect to be black mould tested to be sure that it is black mould in air ducts. Actually, this type of fungus is dangerous. With early inspection, you can avoid a time consuming and expensive cleanup.

What is the root cause of this mould, identify that. Damp wall interiors and wet baseboards can contribute to mould. Identify the problem and treat the main cause of mould, this ensures the problem doesn’t happen.

See the insulation around the HVAC system in your home. If the mould in your air vents has extended into the peripheral insulation, you will have to replace this material.

Clean the insides of the air vents using a cleaner that has been recognized by the NADCA. Since the improper removal of mould can be a waste of money and time, you will want to choose someone who has the experience and specialized knowledge in removing fungus.

We hope this article serves you better the next time you wish to clean black moulds off your walls. If you want to get a professional Mould Duct Cleaning Melbourne service for the same, you can call us on 1300 068 194 to get same day, on-site HVAC Mould Removal Services.